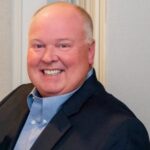 Perrigo Inc., a preeminent pharmaceutical process equipment supplier in the United States announces that John Christensen has been named President. This announcement was made official on October 1, 2021 by Past President and company Owner Charlie Clark who will now be serving as Chairman of the Board. Charlie stated, “John has been a hard working and loyal partner to me and his promotion to President is well deserved.”

John started working for Perrigo in 1987 where he quickly worked his way into the sales office. With the mentorship of Charlie, he quickly became an expert in the industry. He then went on to be Charlie’s eventual partner and Vice President before becoming the 4th President in the company’s 100 years in business. When it comes to John no task is too tall, with his favorite saying being, “go big or go home.” When asked about the future of Perrigo John said, “ based on our three previous Presidents, I have big shoes to fill and I look forward to the challenge”.